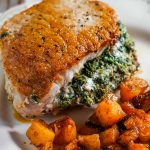 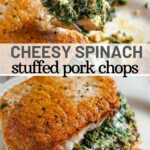 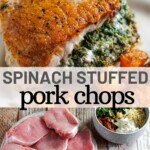 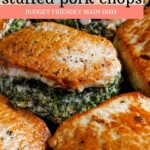 This spinach stuffed pork chop recipe yields golden browned pork chops stuffed with a creamy and savory spinach and cheese filling that tastes a lot like spinach dip and is so, so good. 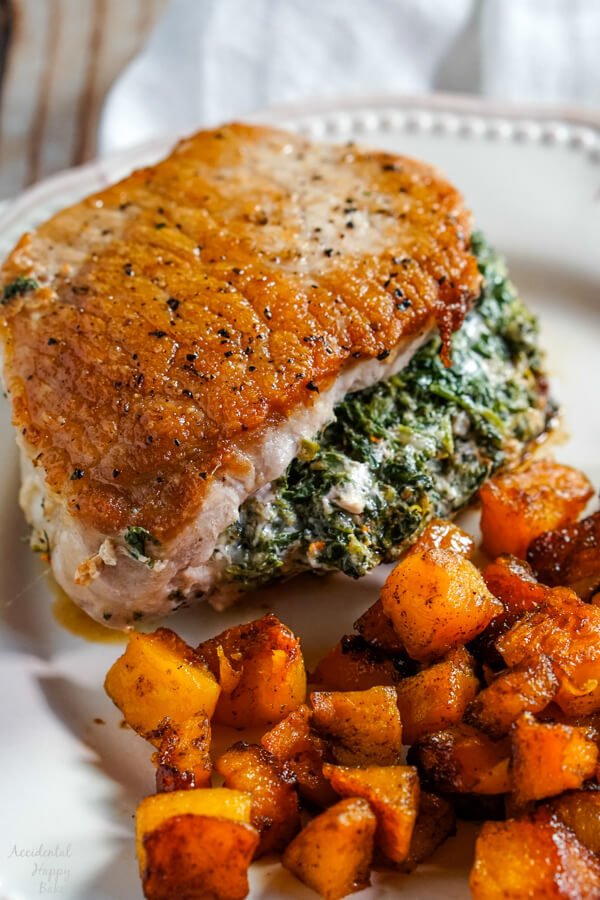 My husband told me I shouldn’t add the recipe for these cheesy spinach stuffed pork chops to the blog. He said they are too fancy, too much work. Little does he know that these pork chops take all of about 20 minutes to throw together!

I don’t blame him though, if you’re going simply by looks and taste, this recipe does seem fancy. Golden browned pork chops are stuffed with spinach, cream cheese, asiago cheese, sundried tomatoes and garlic. The creamy and savory filling tastes a lot like spinach dip, so you know it’s good!

What do you need to make spinach stuffed pork chops?

To make stuffed pork chops, the first thing you’ll do is cut the pork chops. Using your sharp knife cut a pocket into each chop. You want to be careful not to cut completely through the pork chops. I like to leave around a centimeter border around the edge. The nice thing when slicing the pork chops is your cuts don’t have to be the neatest because once the filling goes in, you don’t even notice it! Just try and make your cut as evenly in the center of the chop as possible and don’t worry if it’s not perfect.

Next we’ll make the filling. Start by thawing one 10 ounce box of frozen spinach. Squeeze out all the extra moisture and add it to a mixing bowl along with ¼ cup drained julienne cut sun dried tomatoes, ½ cup of chive and onion flavored cream cheese, ⅓ cup of asiago cheese, and garlic.

I love using flavored cream cheese in recipes because it adds so much flavor while cutting down on the ingredients needed. And by buying precut sun dried tomatoes, we cut down our prep time even more.

Now it’s time to preheat our pan and stuff the chops. Add about 2 tablespoons of olive oil to a large skillet and heat on medium high. I recommend using a cast iron skillet because it gives the pork chops such a lovely color.

Stuff each chop evenly with the spinach filling. Generously season the outside of each chop with salt and pepper and add them to the hot oil in the skillet. Cook for 4-5 minutes on each side or until the internal temperature reaches at least 145 degrees F when checked with a meat thermometer. I cook my pork chops to a temperature of 160, but that’s just my preference.

Can you make Stuffed Pork Chops ahead of time?

Yes. If you would like to make these ahead of time, simply follow the steps through stuffing the pork chops, then cover and refrigerate the pork chops until you are ready to cook them.

What should I serve with stuffed pork chops?

1. Using a sharp knife, cut a pocket into the center of each pork chop. Do not cut completely through the chops.

2. Squeeze as much of the liquid from the thawed spinach as possible. In a mixing bowl, combine the drained spinach, cream cheese, Asiago cheese, sun dried tomatoes, and garlic.

4. Heat 2 Tablespoons of olive oil in a large skillet over medium high heat. Add the pork chops and cook for 4-5 minutes on each side until the pork chops are golden browned and have reached an internal temperature of 145 F when checked with a meat thermometer. 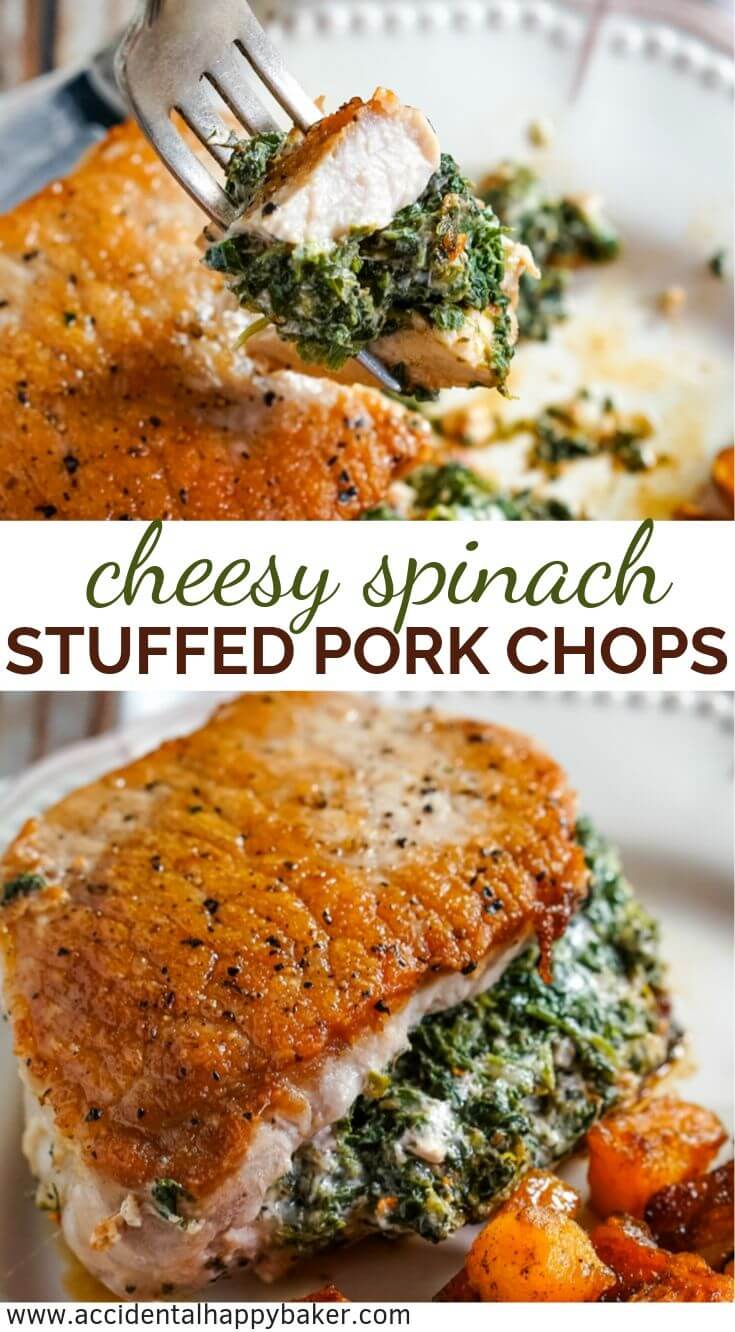 This was delicious. My husband loved it. It will be on the menu now on.

Hello, can I bake these instead? If so, what temp would you recommend and how long? Thanks!

So this is an amazing recipe and husband approved! I made it but the pork chops I had on hand werent as think and I used fresh spinach and cooked it with all the ingredients for the stuffing. Then I just topped our chops with. Looked so yummy added it to my baked potato. It was delish!