Fresh, light, and full of flavor, this Southwest caviar is easy to make and always a hit at get-together’s and barbecues. Get used to bringing home an empty bowl folks. 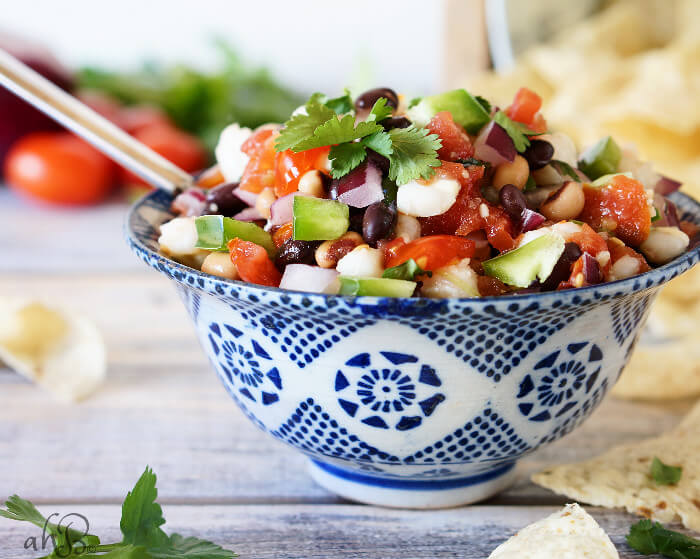 This is a first for me on Accidental Happy Baker. Why?  Because I didn’t make this Southwest caviar. My husband, who’s cooking is usually limited to corndogs and bacon, actually prepared this. That should give you an idea of just how easy this stuff is to make.

Actually, the reason behind him making it this time was pretty sweet. His mom had asked me to make some Southwest caviar to bring to her birthday party. Of all the things I make, this is one of her favorites and it happens to be one of  my husband’s favorites, too.  Anyway, since it was for his mom’s birthday, he wanted to be the one making it. So I sat at the table and gave directions as he chopped the veggies and measured ingredients out. 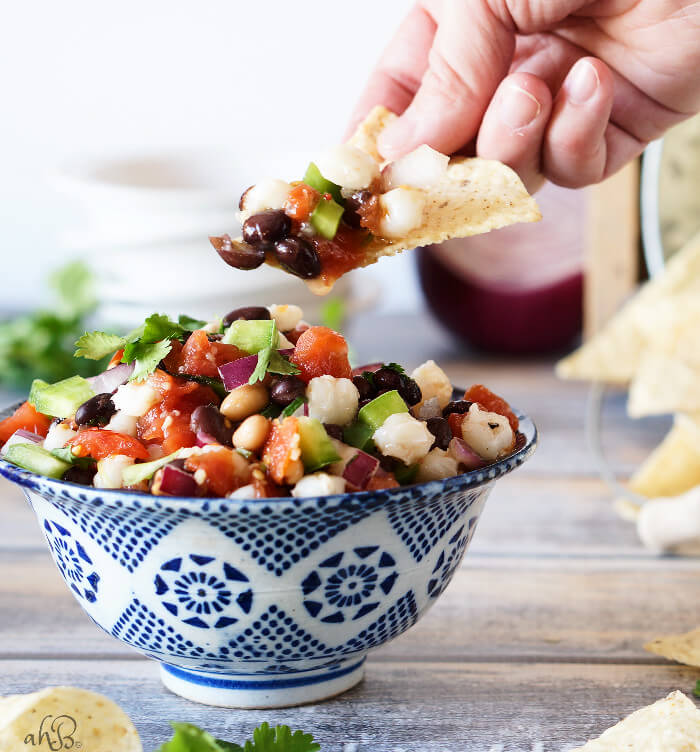 This salsa is best made a few hours beforehand so that all the flavors can mingle and meld together, so he made it early in the afternoon for the party later that night. I didn’t tell him that I was thinking of photographing it real quick for the blog, so when he found me a bit later, working on the photos, he was like, “What is this?! I made this!”

I laughed and told him, yes, but I’d planned on putting it on the blog sometime, might as well do it now while it was just sitting there anyway. He now thinks that if this goes viral, he thinks he deserves a contributor’s fee. LOL. I think that he gets paid pretty well with free samples every week, but I guess we’ll see how it goes. 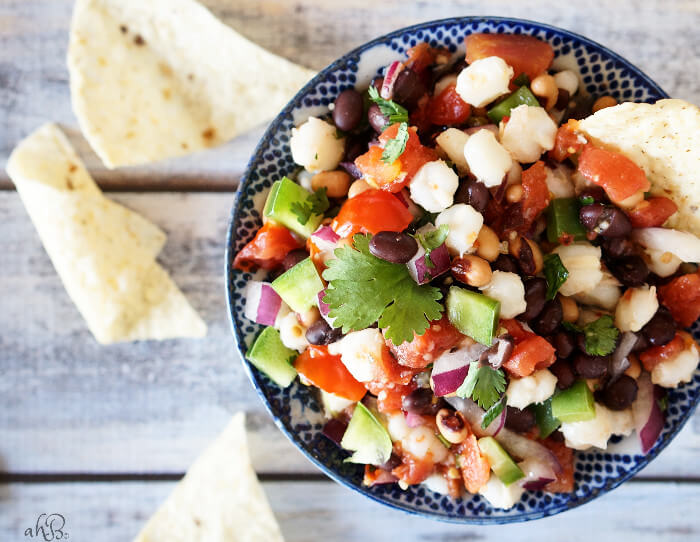 Texas caviar, cowboy caviar, in my house it’s called Southwest Caviar. Call it what you will, but anyway around it, this flavorful bean salsa dip is delicious. With Rotel tomatoes, black beans, hominy, black eyed peas, onions, peppers, and cilantro, it’s got a nice kick to it, but isn’t overly spicy.  Funny story, for the longest time my Uncle Don thought this was a salad and would dish it out and eat it with a spoon. And while it is that yummy, I like to serve it with tortilla chips and suggest you do the same!

Amy - pictures look great! as does the food. Yay to your husband for wanting to make this for his mom :) I too love the bowl - very pretty.

Love, love, love the photos! I'm not a fan of salsa, even though my husband is, and this recipe has now been added to my already crazy long must-do list! Where did you get that gorgeous bowl?? xoxoxo

Thanks Colleen, my mom and I were just talking about this bowl today. She gave it to me a while ago. It's become one of my favorites. I'd love to hear what your husband this of this southwest caviar when you make it for him!