Living in the rural midwest, I can’t say that we have a lot of authentic Mexican food. Now I don’t know, I’ve never been to Mexico so I can’t say that I’m the best judge there ever was. But according to all the southwestern transplants that end up around here our Mexican food scene is kind of…limited, pathetic, sad. Kind of wah-wah. 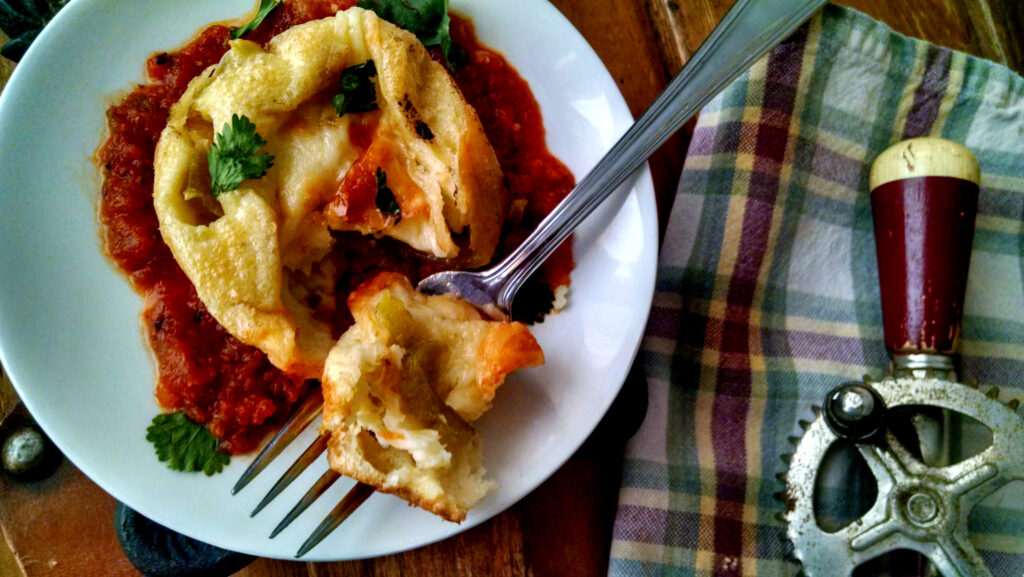 My favorite Mexican dish of all time is chile rellenos. Every time I go to a new Mexican restaurant it’s the first thing I try and the deciding factor on whether I’ll go back or not is the chile rellenos. It seems like chile rellenos swing so far across the pendulum of in terms of reliability of tastiness. I’ve had really, really good ones. Fresh, so piping hot that the cheese oozes out and the pepper inside is tender and spicy. And then I’ve had some really bad ones, one in particular so bad that my sister-in-law compared it to looking like a fried rat.

Not only did it look that terrible, but it tasted like it looked. I know, I shouldn’t have eaten it, but I did try one bite. I never went back there. But I do regret not taking a picture to document this horror. I also really regretted the one bite I took.

As much as I love them, this love affair with chile rellenos is somewhat of a beast of burden because making them is a heck of a lot of work. You have to roast the peppers, then skin them and seed them. Separate the eggs and whip the whites and yolks separately, then combine them back together for the batter. Stuff the peppers with cheese. Batter the peppers. Fry the peppers. And make the sauce to go with them. Sigh.

I did it once. 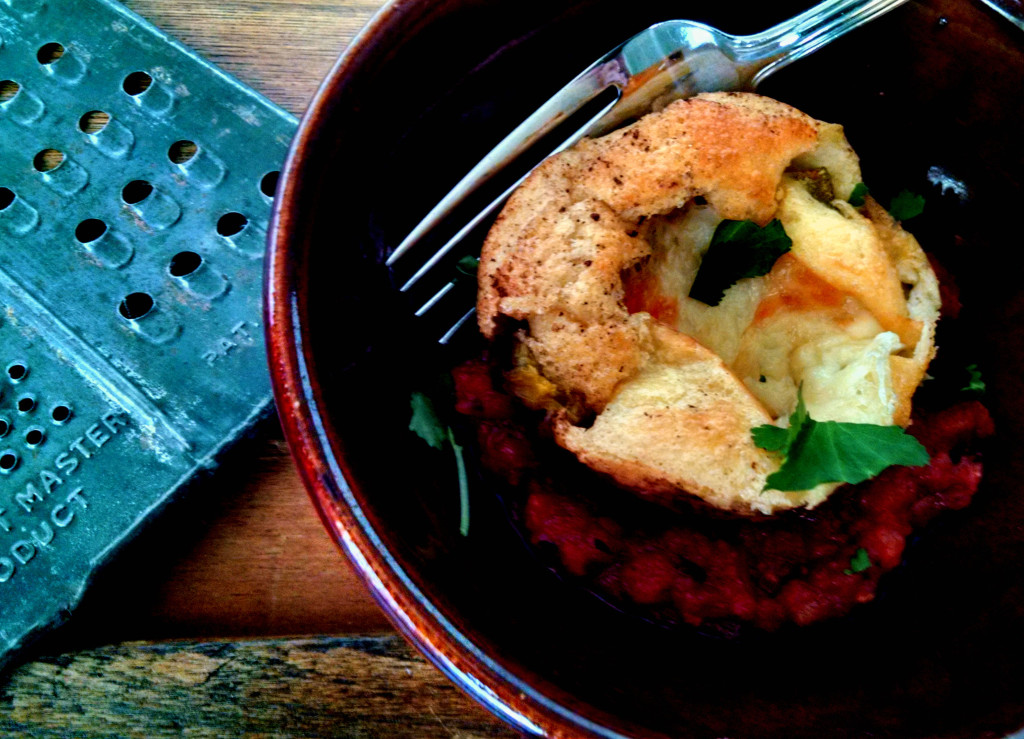 Out of the 6 of us in this house, I’m the only one who really likes them, and that means that traditional chile rellenos are way, way too much darn work! Now, I’ve found a lot of chile relleno casseroles out there on the interwebs, but I can’t say that any of them have really won me over. All the ones I’ve tried seem more like an egg based, pepper laden breakfast casserole and just too far away from the original. The chile relleno cups featured today are a different approach. I paired an egg based Yorkshire pudding-like batter with green chiles which might sound odd. It works though, leaving the outside edges nice and crispy and the inside light and airy with a center of oozing melted cheese just like there should be! 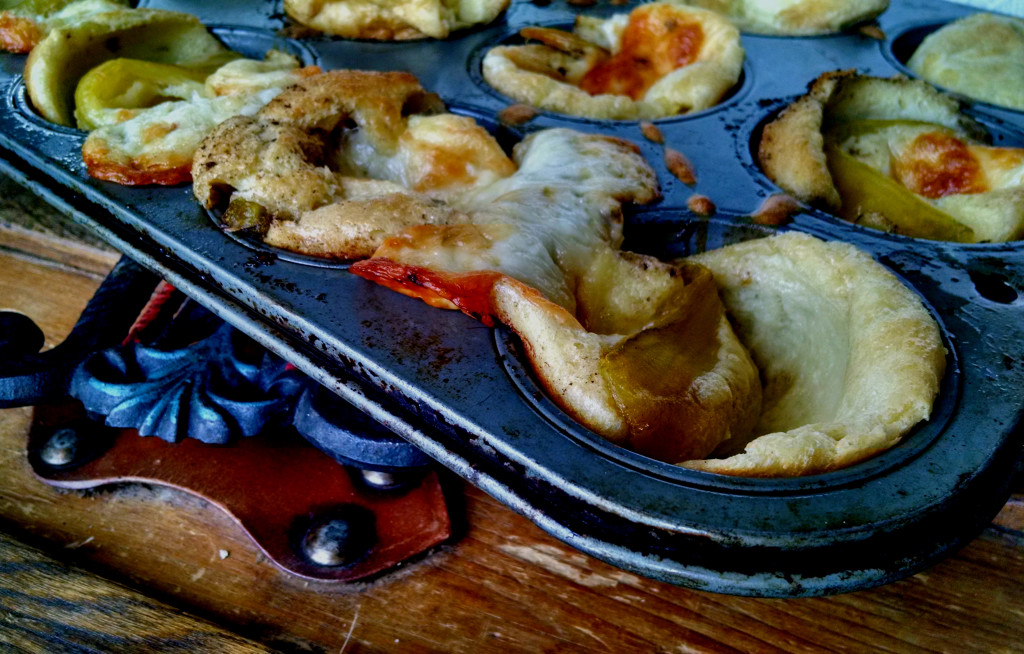 I like using fresh ingredients when I can, but with this recipe I opted for canned tomatoes and green chiles in favor of the time saved.  Well and the fact that tomatoes and peppers aren’t really in season right now therefore you’re paying more for produce that’s not at it’s prime also factored in. Because canned green chiles lack the bite that poblanos have, I’ve used pepper jack cheese instead of plain Montery Jack to up the spice level. But if you aren’t a spicy eater, then feel free to stick to the Montery Jack. The ranchero sauce that goes with this is easily modified as well. If you like it hot, add more jalapeno. If you don’t, cut it back.

Amy, Thank you for the Chili Relleno Cups recipe. We are having a big Cinco de Mayo party and one of the dishes is chili rellenos. I am looking for a simplified version for serving and preparing ahead for 50-75 guests. If I make these ahead, can I heat them at the time of the party and pour sauce on each one with some fresh cilantro? I know I can try this on my own, but thought you may have already done this with your leftovers. Thanks in advance for responding to my question. Sharon

Hi Sharon, that sounds like a fun party! I think that you are right and that these would work well to do ahead of time, although I haven't tried that it out personally. I have a house full of teenage boys, so I never have any leftovers!! However I do think this would work and your best bet would be to make them and then freeze them. Then pop them back into the muffin tins to reheat them until they are piping hot and the cheese is all melty and top them with the sauce and cilantro.

Looks delicious! Will the recipe still work if I use gluten-free flour?

Your recipes look so delish...lovely blog! I love connecting and meeting new bloggers. I am a fashion blogger..not so good with food...so I'll stick to my niche!

Valerie, thanks for your kind words. I am so glad that you stopped by. I can hold my own in the kitchen most of the time, but I am a fish out of water when it comes to fashion. I seriously have to text pictures of my outfits to my friends and have them tell me if they are safe to wear out of the house when I have to go to public events. It's embarrassing. I'll have to swing by and check out your blog so I can pick up some tips.

Eeks. This one won't work in France - ingredients too hard to find. But it sure does look like something I would like!

Oh, that makes me sad. Is it the peppers that are hard to come by there?

These look amazing. I didn't know we share the same Mexican favorite!

Obviously all the cool people like Chile Rellenos! :D