Chicken Zucchini Casserole is the perfect hearty weeknight dinner and a great way to sneak in more veggies. Chicken, vegetables and stuffing are tossed with a creamy homemade sauce and then baked in the oven. 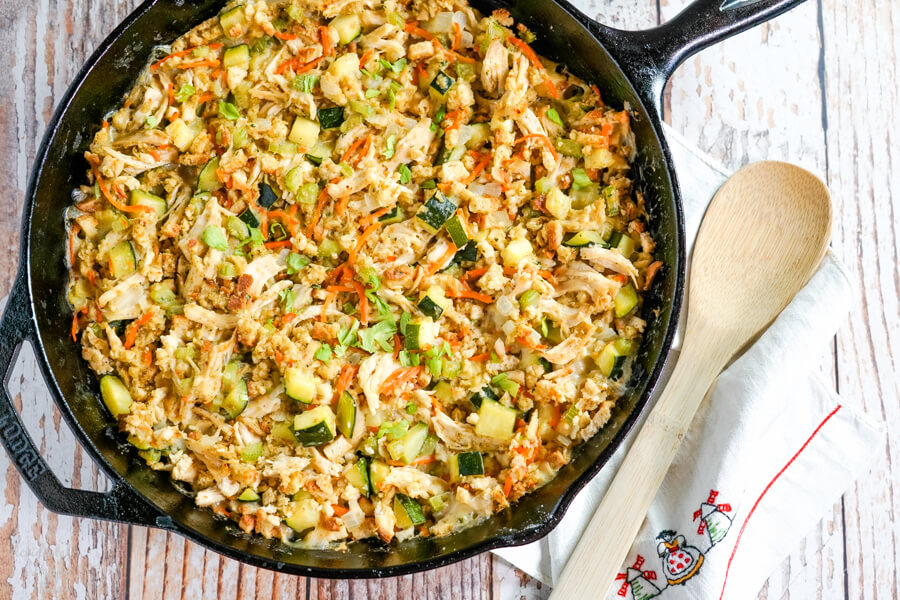 This Chicken Zucchini Casserole is a one pan wonder! It’s easy to make. Creamy and hearty without relying on canned cream of chicken soup. And it’s chock full of vegetables, which makes this casserole healthier for you and easier on your budget.

Do you have a cast iron skillet? I’ve got to tell you, the more time I spend in the kitchen, the more I appreciate my cast iron skillet. This little gem makes it so easy to start the base of this casserole on the stove top and then finish it off in the oven. No need to dirty up a pan and then also a casserole dish! 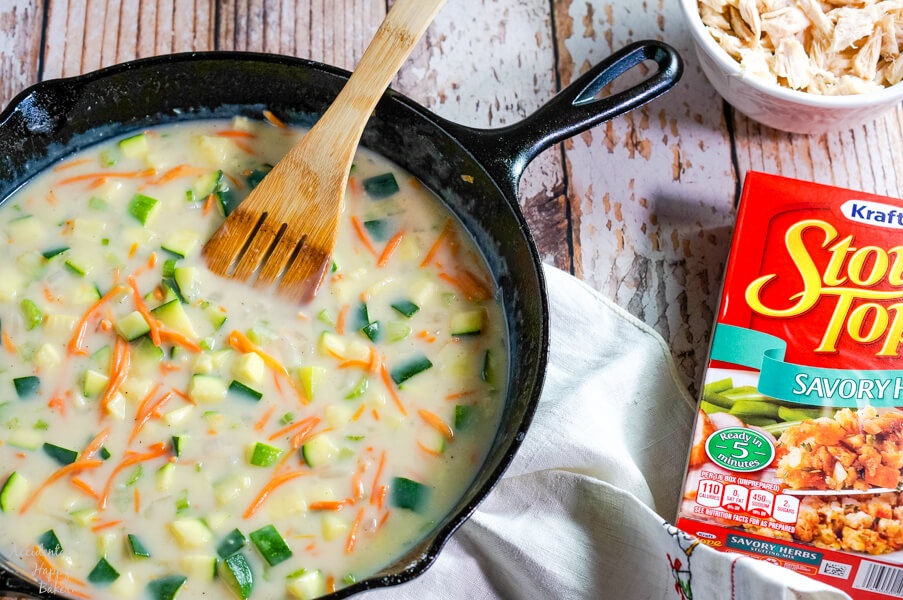 To make this veggie and chicken casserole recipe you will need to have 2 cups of shredded or chopped cooked chicken, this is about equal to a little less than a pound of chicken breasts. You can use white or dark meat chicken and leftover chicken works great for this recipe. It really helps speed things along. If you are the kind of person who likes to cook in bulk and freeze meat to use later this is the casserole for you. 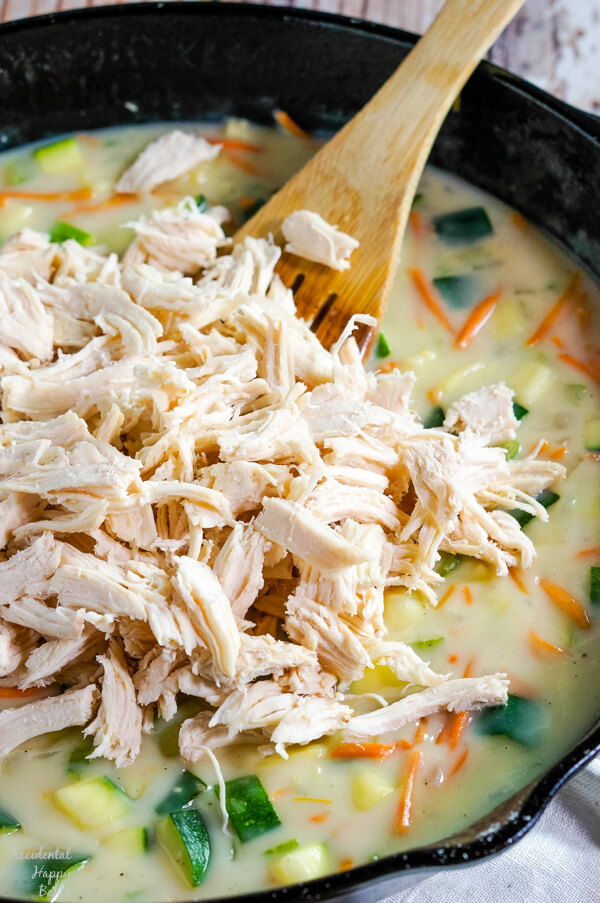 Zucchini, celery, onions and shredded carrots play the supporting roles in this casserole. I like to buy the matchstick carrots because they cut out the time of having to shred carrots. If you don’t have some of these vegetables on hand yellow squash, mushrooms, or green beans would also make great substitutions. 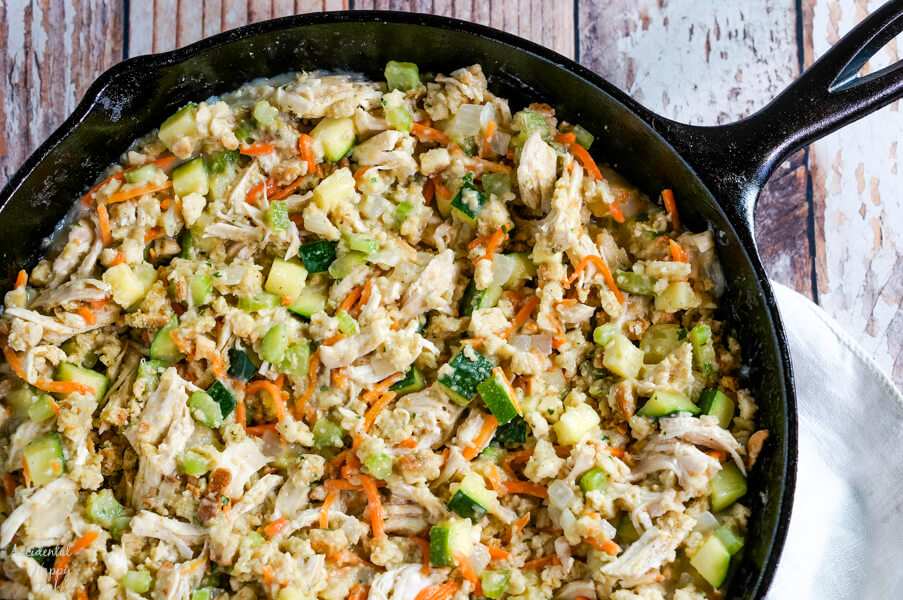 The last major player in this dish is the stuffing. Stove Top Savory Herb stuffing is what is pictured, but you can use just about any flavor of stuffing mix in this recipe, even cornbread stuffing.

How to make chicken zucchini casserole.

Step 1, Melt butter in a large cast iron skillet on medium heat and cook the vegetables until they begin to soften. Add the flour to the mixture and stir until it’s dissolved. It will kind of look like a gloppy mess and that’s okay! It’s supposed to!

Step 2, Slowly add the broth and milk. Whisk and stir until the mixture is thick and bubbly.

Step 3. Stir in the shredded chicken, stuffing mix, and sour cream. Season with salt and pepper.

Step 4. Slide it in the oven and bake it for 40 minutes or until the top is golden brown.

If you don’t have a cast iron skillet, it’s still easy to make this recipe. Instead of baking the casserole in the skillet, after step 3 simply transfer the mixture to a 9 x 13 baking dish. 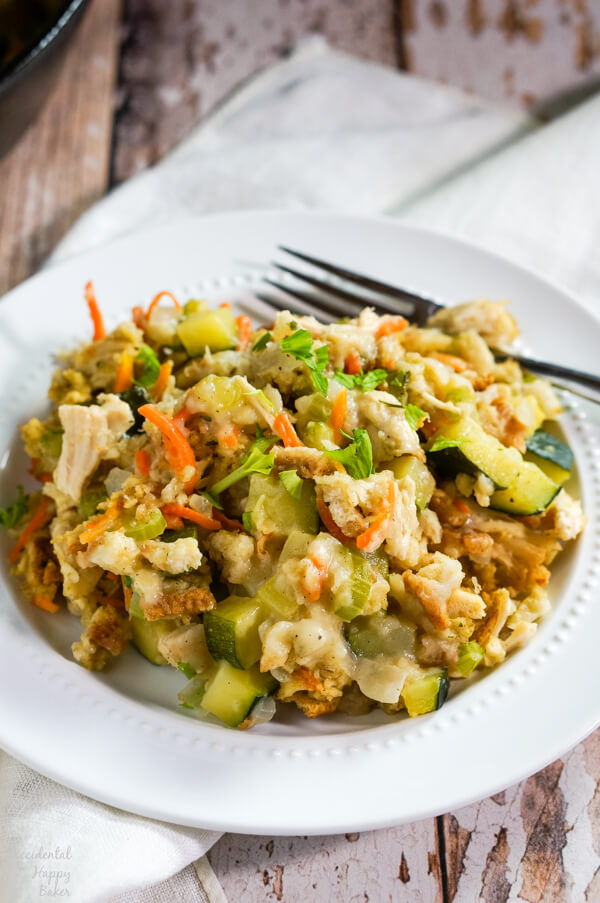 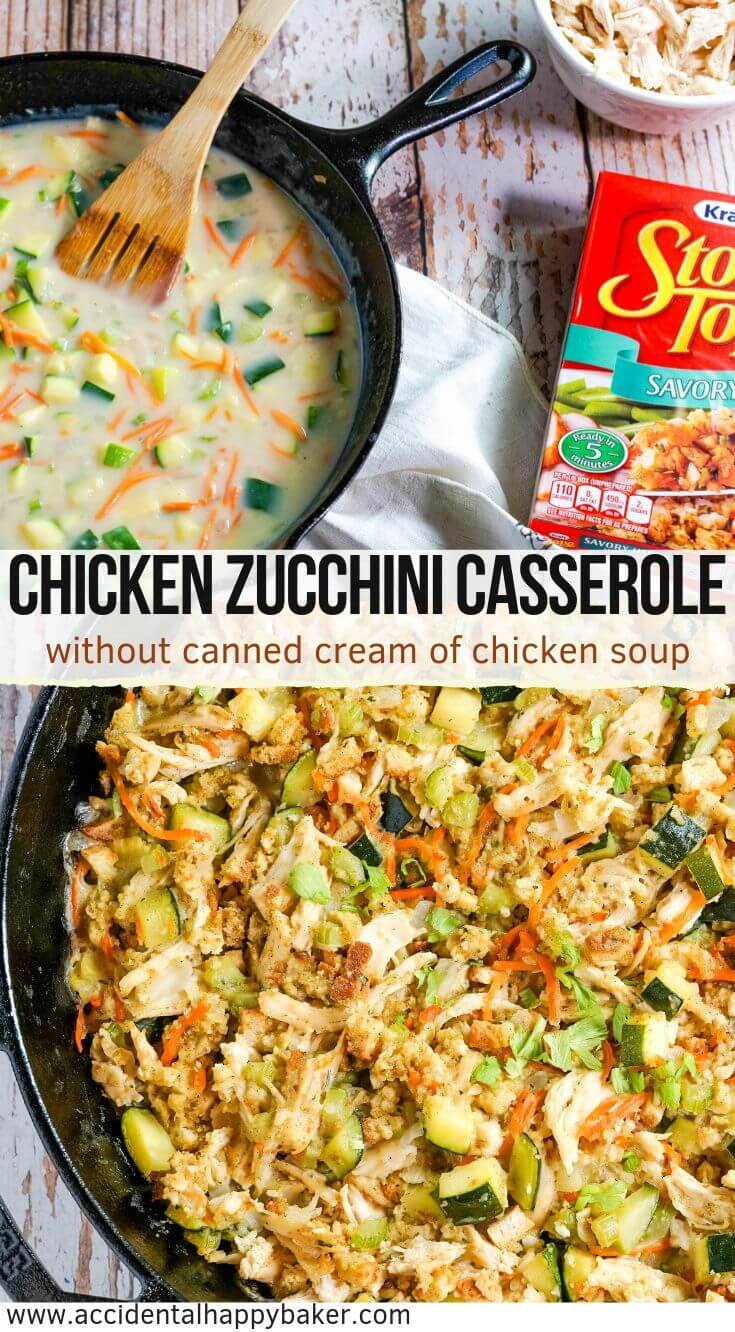 Made this tonight, and the flavors were exceptional! We really enjoyed it. Will be making it again! Thank you!

Fantastic Kathy! If you have any more zucchini and chicken leftover I have one more easy skillet dinner that uses both on the site, Skillet Chicken and Orzo. So glad to hear you enjoyed the casserole!